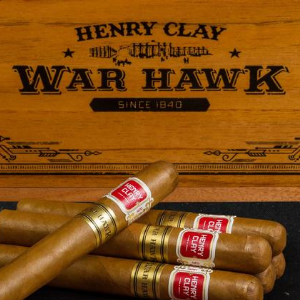 Henry Clay rose to Speaker of the U.S. House of Representatives in the early 1800s, and was known above all, as a staunch U.S. nationalist. Clay believed strongly that military force was the only option left to fight British imperiousness. The term “War Hawk” was coined and now used in political circles to describe one who favors war as an ultimate resolution of a conflict. The Henry Clay “War Hawk” is a dedication to Henry Clay’s lasting influence. The War Hawk cigar is aptly named, as it is a bit rebellious in going against its own tradition by not using a Connecticut Broadleaf wrapper – as do most other Henry Clay brands. The “Hawkish” cigar is a complex blend, boasting unique flavors, with plenty of spice.

Club Humidor – All Rights Reserved.
– Powered by Funnel Boost Media –
We use cookies on our website to give you the most relevant experience by remembering your preferences and repeat visits. By clicking “Accept”, you consent to the use of ALL the cookies.
Cookie settingsACCEPT
Manage consent